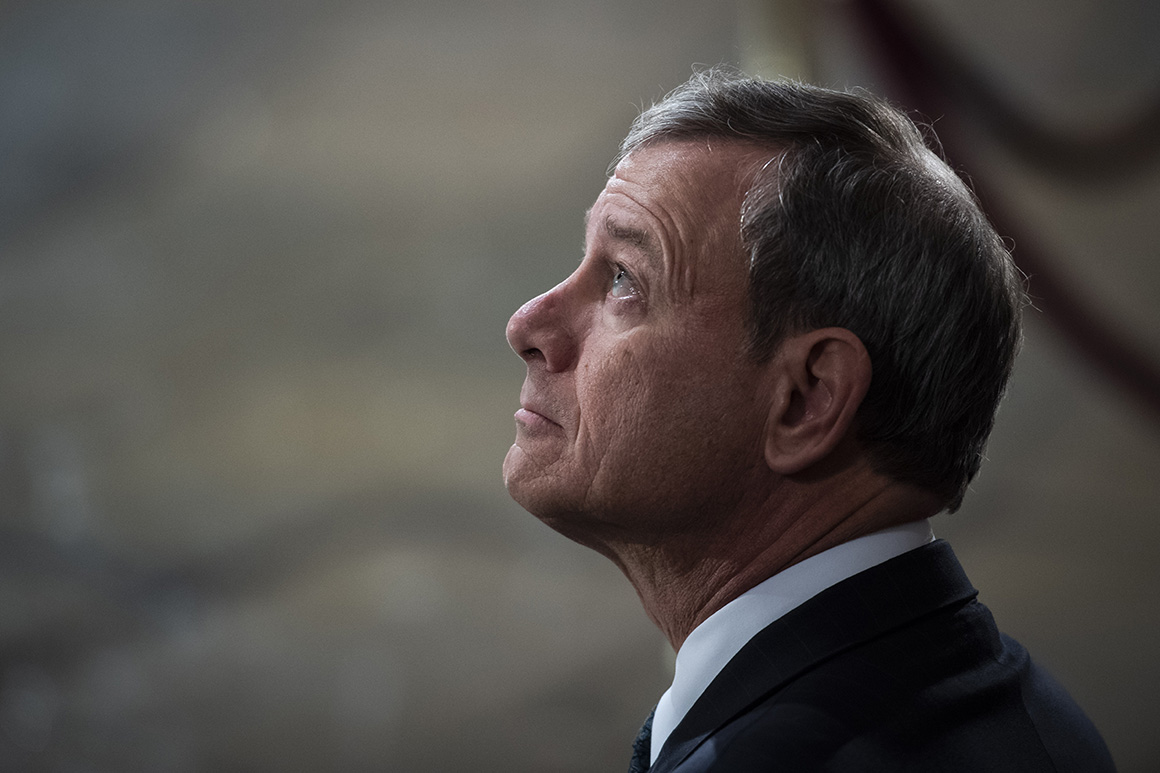 In a small Capitol Hill office after President Donald Trump had been impeached and official Washington bolted town for the holidays, a three-person team gathered to dig through musty old law books and congressional records.

The Senate parliamentarian, Elizabeth MacDonough, and her aides were scrambling to prepare for an event with little precedent in American history — the impeachment trial of a U.S. president. In just a few weeks, they would have to advise Chief Justice John Roberts on how to run that trial and address a slew of arcane procedural questions that few — if any — had ever been asked. Their answers, they knew, could influence how the historic event unfolded.

They read everything they could find on the subject, including transcripts and other historic materials from the two previous impeachment trials of U.S. presidents, as well as the work the office did in preparation for a case against Richard Nixon that didn’t happen because of his 1974 resignation.

They also looked at 17 other impeachment cases involving judges and other government officials dating to the John Adams administration. They made notes and downloaded all manner of material onto the laptops and internal systems they would be able to bring to the Senate floor and access at a moment’s notice.

“They’re up to their eyeballs in preparations,” said Alan Frumin, a former Senate parliamentarian and one of MacDonough’s mentors.

In a few days, House Speaker Nancy Pelosi is expected to send two articles of impeachment against Trump to the Senate, kicking off a trial. While Roberts is tasked with overseeing the proceedings from the Senate’s most prominent chair, it will be MacDonough hovering, omnipresent but essentially unseen, in the corner of the frame, offering guidance the entire time.

“America is about to get to know Elizabeth MacDonough,” Moira Whelan, a Democratic strategist and former Obama-era State Department senior official, recently posted on Twitter.

MacDonough, 53, will bring to her assignment more than 20 years of Capitol Hill experience as a non-partisan career government employee, going all the way back to her days in the Senate Library. She started as an assistant in the parliamentarian’s office just a few months after President Bill Clinton survived his own Senate impeachment trial and rose to become the first female Senate parliamentarian in U.S. history. Along the way, MacDonough has played pivotal roles helping senators navigate vicious debates over taxes, government shutdowns and health care. She helped the upper chamber work through the controversial decision to remove the filibuster as a weapon to block judicial nominations.

One of MacDonough’s most important assignments came in the wake of the Sept. 11, 2001, terrorist attacks, when she was still a relatively junior Senate adviser: preparing a continuity plan in case the U.S. Capitol ever needed to be evacuated and the government relocated.


Her job has many bosses. All 100 senators look to the parliamentarian’s office for advice as they draft legislation. Senate committees find out from MacDonough’s team which bills are headed their way. On the floor, she’s the one who provides guidance to the presiding officer whenever there’s a question or debate about precedent or procedure.

But it’s ultimately the Senate majority leader who makes the call on who serves in the post: Harry Reid promoted MacDonough in 2012 after Frumin’s retirement, and Mitch McConnell kept the Washington, D.C., native around when Republicans took control of the chamber two years later following the 2014 midterms.

“I’ve been here with many, many parliamentarians. All were good. But she’s the best,” said Vermont Democratic Sen. Patrick Leahy, the longest active serving senator.

For the Trump trial, MacDonough’s three-person office will get the added responsibility of serving as the main liaison for Roberts, who along with a select group of aides must make the short commute into a building that they typically only visit on ceremonial occasions.

Her team will be tasked with delivering to Roberts the daily program that he’ll use to guide the proceedings. She will also be the one helping Roberts keep track of the clock as he calls on the people with assigned speaking roles — Trump’s White House and personal attorneys, Senate leaders and the House impeachment managers who will present the case for the Democrats. It’s a critical task for a chamber that operates on a series of careful agreements dictating time management.

Perhaps most importantly, though, MacDonough will be the one who must give the chief justice instant advice should he need to make any snap rulings or decisions that could influence the trajectory of the trial.

Unforeseen events also loom. While the members are supposed to sit silently during large portions of the trial, they do have the right to raise objections, pose questions and hold press conferences right outside the ornate chamber doors. The whole world will be watching, too, including one person — Trump — with more than 70 million Twitter followers and little restraint on raining down invective on previously unknown figures.

MacDonough is no stranger to Capitol Hill. Senators feted the moment she made history as the first woman to get the job. Freshmen preparing for their inaugural turn chairing the Senate have described her as a lifeline to navigating arcane legislative questions.


Yet given the inherent political nature of her job, MacDonough also faced some criticism. Conservatives ripped MacDonough, for example, over a 2017 procedural ruling that hindered the Senate GOP’s attempts to dismantle the Affordable Care Act.

She’s taken the criticism in stride. During a commencement speech in 2018 at her alma mater, the Vermont Law School, MacDonough weaved together stories about some of those tense showdowns with more light-hearted moments, such as a quip about Sen. Marco Rubio’s awkward reach to grab a sip of water during a nationally-televised speech.

“Taking the long view is a part of what I do every day as I represent the interest of my unseen client, the institution of the Senate itself,” MacDonough said. “While serving its 100 members on a day-to-day basis, I still represent the Senate. No matter who is in my office asking for assistance, I represent the Senate with its traditions of unfettered debate, protection of minority rights and equal power among the states.”

Of course, senators don’t have to listen to her either. Reid and the Democrats, for example, overruled MacDonough in 2013 when they invoked the “nuclear option” to end the requirement that 60 votes were needed to confirm executive branch nominations and non-Supreme Court federal judicial appointments. She faced the same predicament in 2017 when McConnell changed the Senate rules so future Justice Neil Gorsuch could get confirmed to the Supreme Court without having to find the votes needed to overcome a filibuster.

“It was a stinging defeat that I tried not to take personally,” MacDonough recalled in her speech to the graduating students. “The one thing I can tell you about situations like this. It will never feel good, or rewarding enough, to say, ‘I told you so,’ when people finally understand the point of which you are trying to convince them.”

MacDonough — and, in turn, Roberts — may end up breaking new ground during the Trump impeachment trial. Chief justices have only presided over two Senate trials involving presidents, and neither left much in the way of precedent. Back in 1868, the parliamentarian’s role didn’t even exist when Chief Justice Salmon Chase opted for a highly assertive role during the trial of President Andrew Johnson, which ended in his acquittal.

More than a century later, the Senate parliamentarian’s office built a dossier as it geared up for a Nixon trial that then-Chief Justice Warren Burger would have overseen. While the Senate never got that case, the parliamentarian at the time, Floyd Riddick, explained in an interview with the Senate historian that his research backed up the notion that the parliamentarian would be essential for any future chief justice who presides over another impeachment trial.

He later told TV interviewer Charlie Rose that he “did nothing in particular and I did it very well.” But Rehnquist, who had written his own book in part about the Andrew Johnson impeachment trial, did issue several controversial rulings, including one instance in which he ignored the advice of the parliamentarian to rule that the 100 senators shouldn’t be referred to as “jurors.”

Frumin, the parliamentarian at the time, recalled that he hadn’t been expecting the issue to come up, forcing him to scramble in real time to find the right materials while still paying attention to the debate. But Rehnquist, as was his right, made his own decision.

For Trump’s trial, Frumin will be on the CNN set offering commentary and insights on the Senate’s unique protocols, including the role that MacDonough will play at Roberts’ side. He doesn’t expect her to wilt in the spotlight.

“Parliamentarians have been trained over the years that you’re the referee,” Frumin said. “You’re not a player. And that you don’t create controversy. You don’t look for controversy. You don’t assert yourself. You’re there as a reference to make a call or give advice when called upon. I think she’ll do everything to prevent herself from becoming the story.”

John Bresnahan contributed to this report.